The Avid Listener
America Goes to the Opera
Opera in America after the Civil War: Many Languages and a Splintered Audience

In their lessons, violinists must train very hard to play “in tune.” Singers face the same challenge; some, fearful of sounding “pitchy,” might even use Auto-Tune to prevent mistakes in live performance. The slightest change in temperature and humidity can knock a piano “out of tune,” so concert halls usually hire a professional tuner to “retune” the instrument before each concert—a grueling process that can take hours.

To play or sing in tune is to match the pitch frequencies prescribed by a tuning system. Despite an infinite number of possible systems, for the past 200 years most Western musicians have used just one, called “equal temperament.” Listeners have become so accustomed to the sound of equal temperament that its organization of pitch frequencies sounds normal, and a performer’s failure to match those frequencies produces music that sounds wrong. But equal temperament, much like the very concept of normality, is a product of its time and place. It reflects the politics of a culture that values consistency over variety, uniformity over difference—and, as we will learn, a prototypical nondisabled body over the extraordinary diversity of human morphology.

According to legend, the mathematician Pythagoras (ca. 500 BCE) discovered the ratios underpinning musical intervals: the ratio of 2:1 governed the interval of an octave (e.g., low do to high do), while the ratio of 3:2 produced the interval of a perfect fifth (e.g., do to sol). Underpinning music, so followers of Pythagoras argued, were the simplest numbers (1, 2, 3) of rudimentary arithmetic. Early tuning systems were modeled upon Pythagoras’s ratios: there seemed to be something ideal and divine in the simplicity of his numbers. But this simplicity concealed a problem—a big one. Beginning from do, a rising sequence of perfect fifths will eventually work its way back to a much higher do (3:2 of 3:2 of 3:2, for twelve times). However, attempting to cover that distance by octaves (2:1 of 2:1 of 2:1, for seven times) will result in a slightly different pitch. Or, to put things mathematically: (3/2)12 ≠ (2/1)7. In practice, this means that a perfectly tuned fifth (do to sol) will result in an out-of-tune octave (do to do). Likewise, a perfectly tuned octave will result in an out-of-tune fifth. 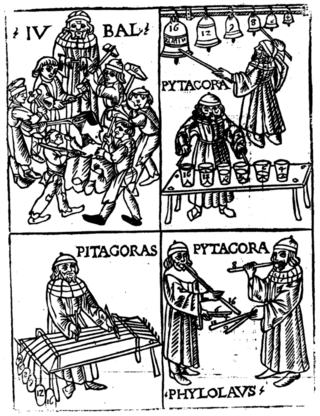 In this fifteenth-century illustration, Pythagoras hears the sound of banging hammers (upper left) and then experiments with the pitch relationships of other proportionally shaped objects: bells, cups of water, pipes, and weighted strings (clockwise from upper right).

To resolve this conundrum, some musicians invented temperaments—that is, tuning systems that produce perfectly tuned octaves but temper (adjust) other intervals. In the 1700s (the century of J. S. Bach, Joseph Haydn, and W. A. Mozart), a type of temperament called “well temperament” was popular. In a well-tempered tuning system, frequently used intervals (e.g., the fifth from do to sol) are tuned as closely as possible to their Pythagorean ratios. Other intervals, used less frequently (e.g., the fifth from mi to ti), would then be tempered. Music performed in a well-tempered system can sound really great (some intervals are perfectly in tune) and also really wonky (other intervals are purposefully out of tune). Listeners likewise developed a kind of sonic tolerance: an out-of-tune interval wasn’t wrong—just different and uniquely expressive.

A comparison between these two temperaments reveals their ideological bases. In well temperament, perfectly in-tune intervals complement significantly out-of-tune intervals. In equal temperament, all intervals (save the octave) are slightly out of tune. The former system fosters variety and difference, while the latter preserves consistency and uniformity. In How Equal Temperament Ruined Harmony (And Why You Should Care), Ross Duffin argues that these two systems also reflect tension between two branches in the philosophy of science: vitalism (popular before the 1800s) and mechanism (popular since the 1800s). He writes, “The vitalists saw life in the irregularities, the elusive, indefinable aspects of things, while the mechanists saw strength and ‘progress’ in the regularization of things. … It is certainly easy to see unequal [well] temperaments as vitalist and equal temperament as fitting a rationalistic ideal.”

These oppositional qualities—variety versus consistency, difference versus uniformity, vitalism versus mechanism—map onto contemporaneous sociological concerns, particularly regarding the relationship between disabled and nondisabled bodies. Before the 1800s, bodily perfection was an elusive ideal, only manifested by the body of God or the King. In their infinite variation, all other bodies were considered imperfect. Perfection was rare, while imperfection flourished; there was, to return to Duffin’s description of vitalism, “life in the irregularities.” This is not so dissimilar from well temperament, in which a few choice intervals are “perfect” (they align with those divinely inspired Pythagorean ratios), while others are “imperfect” (they are tempered by man, and thus out-of-tune). This imperfection was an asset, not a defect: as music theorist Johann Georg Neidhardt argued, variety in the tunings of intervals produced a “heightening of emotion” in the listener.

In the 1800s, which saw the rise of statistics (in tandem with eugenics), psychiatry (in tandem with the psychiatric ward), and industrialization (in tandem with mass production), a concept of normality and abnormality replaced that earlier model of perfection and imperfection. Human variation was placed on a bell-shaped curve, which identified most bodies as normal and other bodies as above or below that norm. For example, the bell curve presumes that most people have a typical height, while some are too tall and others are too short. Rather than accommodating the infinite variety of human morphology, followers of the bell curve privileged a constructed (and wholly imaginary) normal body, one to which most bodies could conform or aspire. To borrow from Duffin’s description of mechanism, the promotion of normality allowed for the “regularization of things,” improving the life of “normal” people, but leaving bodies deemed abnormal excluded and stigmatized.

As disability scholars Jan Branson and Don Miller write, “A view of a diverse humanity that was imbued with almost infinite difference [i.e., pre-1800] gave way to a view of an essentially uniform humanity that was surrounded on its edges, on its margins, by the pathological foils to that uniformity or ‘normality’.” This conception of humanity emerged at the same time as equal temperament, and the similarities are striking. Nothing should lie in the out-of-tune fringes of the bell curve. Nothing should vary from the prototypical norm. Everything should sound the same. Everything should be, well, average. 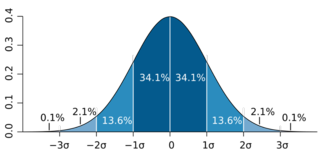 Emerging in the 1800s with the rise of statistics, the concept of normality placed human variation on a bell-shaped curve. (Image by Mwtoews [CC BY 2.5 (http://creativecommons.org/licenses/by/2.5)], via Wikimedia Commons)

A number of modernist composers (Harry Partch, Terry Riley, La Monte Young, and Georg Friedrich Haas) have sought to undo the supremacy of equal temperament by developing new tuning systems or reverting to earlier ones. But equal temperament’s main advantage, the reason for its astonishing staying power, is its efficiency: like the machines of mass-production, equal temperament produces a product that works for most music, most of the time, for most listeners. We listen within a bell curve. But by suppressing the delightful twangs of an out-of-tune chord, perhaps we’ve lost something in the process—the beauty of difference.

Thank you for the wonderful expose, for Carl Radford's video, and for including Hymns & Dervishes in this context. How Radford describes the ability of the harmonies to dictate tempo was particularly enlightening. I believe this is what is going on in the Dervishes part of the my recording, and now I understand why!

Fascinating to me, especially knowing a little of your research background. I've been surprised to learn I like a little conflict of tuning; one modern song that comes to mind is Norway by Beach House. The constant triad carries the song and its pitch sinks every now and then. And of course there's the majority of Blues... So at least imperfections are not completely lost in modern time. I was given a pamphlet for new, "more perfected" tuning system, I will pass on this article to its author and see how he responds.

This is only a preview. Your comment has not yet been posted.

The letters and numbers you entered did not match the image. Please try again.

As a final step before posting your comment, enter the letters and numbers you see in the image below. This prevents automated programs from posting comments.

Having trouble reading this image? View an alternate.

Comments are moderated, and will not appear until the author has approved them.

(Name and email address are required. Email address will not be displayed with the comment.)

Dedicated to the idea that music commentary and criticism can be literate and fun to read, The Avid Listener is a blog from W. W. Norton & Company, which fosters discussions between scholars and novices alike.

See More
Follow us on Twitter to get updates about new posts and more! @wwnmusic
If you are interested in contributing to The Avid Listener please contact the blog's editor Julie Kocsis at jkocsis[at]wwnorton.com.